I watched the Fantastic Four movie, 2nd one is it? with Silver Surfer. when I say watched, that admittedly means that I missed a certain amount (most) due to sleep. still, I did see some of it. how much does one need to see, anyway? I saw the 1st one, and this one had the quality of being the 2nd one. it begins with the dopey premise of the FF being fab NY celebs. this seems unlikely because Reed's a nerd, Ben's a grump, and Sue's too well-grounded. only Johnny seems likely for such a trip. frankly, the dark night of the soul stuff that Marvel hit the jackpot with is exactly what turned me from comix. I never cottoned to the FF anyway. I'm not sure why except I will declare that Reed's stretchy super power is ridiculous. the computer-aided effects in the movie didn't help: he had cartoons for arms. it is funny to think how much silliness you can take, then there's a bit more and you just can't accept it. I can't wait to read the book, the physics of human torches. I had pretty well permanently stepped away from comics by the time Silver Surfer appeared. I got the impression that he was just another cosmic Hamlet moping thru the clouds. I hardly saw him in the movie last night. so anyway, Reed's stretching power is stupid. I am reminded of a Justice League of America comic from my fulsome youth. the story concerned a cadre of rejects who weren't up to Justice League snuff. JLA consisted of such youthful, lauded crimefighters as Super Boy, Super Girl, Ultra Boy, and Brainiac 5, in the year 3000 (SB and SG had to fly faster than light into the future to make the monthly JLA meetings and otherwise serve the organization). B5 was the 5th generation nephew of Brainiac, Superman's Nemesis. this fact could prove puzzling because Brainiac was an android, but there you go. anyhoo, the losers decided to form their own crimefighting unit, the Substitute Justice League of America. members all had super powers that were found wanting by the esteemed JLA. Chlorophyll Kid could make plants grow at an alarming rate. Polar Kid could freeze things with a beam from his hands. Night Girl had an array of super powers that, er, only worked at night. my favourite was Stone Boy who could turn to stone. unlike Ben Grimm, Stone Boy couldn't move in the lithic state. good defense, zero offense. in the comic, the JLA got into a 1st class pickle and whaddya think: the Substitutes form a rescue mission. everyone parachutes into the fray except Night Girl who, I believe, went to the night side of the planet and dug her way to the battle scene. impressive, but then, I recall Super Boy cut a planet in half, discarded the part that was engulfed in flames, took half of another planet, fused the two together. honestly, I read this, in 8 pages of stirring action. anyway, as they float down, Polar Boy barks out directions for everyone, including the immortal cry: and Stone Boy, you turn to stone!!!. even as a 10 year old, I thought as how Stone Boy in his lithic state might be more dense, thus heavy, thus too burdensome for his parachute. as in: why the heck doesn't he plummet like a stone? it was just that one bit of implausibility too much. not to leave you fretting, the Subbies saved the day and were awarded some recognition as 2nd rate super heroes. I am not aware that they ever appeared again in JLA activities.
Posted by Simple Theories at 11:03 AM No comments:

I have allowed you to think, Tributarians (or the Multitude, as I like to call you), that I am keenly interested in poetry, shopping and the like. I am, certainly, but I am also committed to paranormal research!!!
Posted by Simple Theories at 7:15 PM No comments: 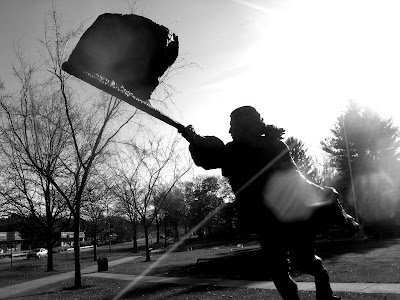 Posted by Simple Theories at 6:37 PM No comments:

I concur with Jack Kimball that Stephen Ellis's poetry should be read. Stephen's work possesses a momentum that requires repeated reading to make sense of. Stephen writes in what often seems like a run-on sentence, tho it's a run-on sentence with a driving spiral that grows clearer by its own insistence. the spiral grows clearer? the poem does, the energy does. happily, Stephen has, so far, embraced the blog space, is posting regularly. please attend.
Posted by Simple Theories at 6:10 AM No comments:

I saw three poets read over the weekend. I was struck by the potential, or inspiration (I know that's a hefty word), that these poets offered. both Geoff Young and Nick Montfort presented the working idea of constraint, constraint as a creative possibility. Geoff utilizing the sonnet as a form to obey and disobey illustrated a canny opportunity available in the conscious attention to process. I take it that he squeezed existing poems into the sonnet constraint. his sonnets don't behave as sonnets, as he himself said, and yet they do, as he also said. his sonnets adhere to sonnet form only in being 3 1/2 quatrains in length. yet they possess sonnet grace, let us say. let me state that the idea of free verse, somewhere along the way, transmogrified into lazy verse, where poems merely consist of adjectives busying about a few nouns, in celebration of hyped up emotion. rote poem. constraints demand more effort, and not rote effort, but creative problem solving, which is what Beth says art is. rhyme and metre got tired as poets mechanically obeyed the timeworn rules. metre and thyme are exquisite when the poet actually feels involved with these elements, with the constraint that these elements offer. going thru the motions, however, adds nothing vital to a work. Whitman, when he deigned to rhyme, shows the weakness of this duty: the music of a tin ear. Dickinson, or later, Creeley, take metre and rhyme, stare them down, and wriggle free. there is a wonderful value displayed here, a historical view pushed against a futuristic one. the wrench of wondering. Whitman had no time for metre and rhyme, except that they made him Tennysonian, so he just wasted his time pretending toward such poesy. these are lessons, friends. as to Mairead, her work spoke of vantage, or persona. the Flann O'Brien wisdom of absurdity that I heard in her work is a conscious stance (I don't mean to imply that it is from O'Brien, only that it reminds me of his work), a working program. I thought, how can I stand thus. well, I cannot, really, that's Mairead, not me. but a learning possibility exists, placing questions where I hadn't thought to put them. she read ripplingly well, so that the humour and skew made imperial sense. I really liked the sense of input and influence that came from these readings.
Posted by Simple Theories at 8:47 PM No comments:

I'm like to wore out with a 2nd reading in 2 days: Nick Montfort and Mairead Byrne reading at Demolicious. Nick Montfort does digital whatsis at MIT. digital whatsis is a way of acknowledging the uncorralled nature of the art. his reading was lecture-like. he discussed each piece and the context was rather illustrative. he began with a vision piece, a video. Nick wrote the words and someone else did the filming. the aesthetic of the vid was Youtube. it consisted of disjointed, fuzzily rendered imagery. the voiceover favoured its own disconnection. the result was a calmly trippy sensation. after the vid, Nick read an array of pieces. all worked within declared limits. one, quite funny, was written entirely on the 2nd row of a keyboard. the last line: "you putter out rote poop." I don't mean to be brief but time is burning. Nick has a site with much on it, here.

Mairead gave a terrific reading as well. many of her poems, all from the same chapbook, were urgent sounding soliloquies. they were built on a goofy logic. "do you happen to know your height? boy, did I". I thought of Flann O'Brien because the absurdity she offered was so reasonable. I wish I had better notes but I opted to listen. I wish more had attended, it was a fine reading.
Posted by Simple Theories at 9:01 PM No comments: