Today’s visit could be our final mall trip of the season. The impetus was some Eddie Bauer coupons that might expire today or soon.PLUS a possible storm coming, which may lay havoc, etc. The Weather Channel forecast certain doom for most of the Atlantic coast, and Santa Claus is reading the papers and thinking he will have to cancel Christmas. On with the mukluks, said we, a finger snap in the face of Boreas, and see what the mall offers.

Before I go further, I must ramble a bit about Christmas music. You hear so many of the familiar songs tarted up by musical factotums in a desperate effort to sound original. You know, Rudolph the Red Nosed Reindeer with a Phil Spector wall of sound production. Or any number of your favourite recording artists attempting to sound sincere while singing about silver bells and winter wonderlands. And of course Elvis singing weela hava huh huh blue Christmas without you… Ick! Chrissie Hynde singing “2000 Miles” is an exception. Playing it now.

Anyway, we arrived at the mall with anticipation. I mean, we were caught in an obvious mallward flow but awaited the telling visual that things were all right, and that Obama’s sensitive bailout of the banks would piss relief on us all. Beth and I really take this seriously, how the turnings of the economic turbine are revealed at the mall. As the economic edifice came in sight we were satisfied that business was at least churning. Not, however, like the time a few years ago when we arrived, entered a hopeless flow around the mall where no parking was evident. It was an hour journey around the place with no parking space for reward. That was then, before Goldman Sachs decided a change was necessary. Today, there were some, few, spaces for our phaeton. Actually stared down an interloper who eyed the selfsame space that we, by the grace of all the gods, had seen first.

We went directly to Eddie Bauer, which is located by an entrance, because we actually had a reason to be there. O Fortuna! There was a 25% sale on EVERYTHING!!! Using a coupon and some Bauer rebate for being avid shoppers (economy savers, really, adding our trickle to the trickle down), we ended up paying 45% off. Lengthy line to the cashiers, stalwart clothes for all.

After Bauer we entered the maw of the beast. Climbing the topsail, I lost my leg!

In the centre of the mall there was this fenced off area and there was like a line of people, both grownups and children, and they were like waiting there to see this guy with this like white beard. The parents weren’t allowed to get close to him but the children were brought like right up to him and even sat on his lap. He’d talk to them and stuff, and scare some of them, and laugh and all. Someone was there to take pictures of the children, who were generally dressed up in Sunday best. He did not seem impressed by the selection of children but the parents looked pleased when their children were returned to them. I guess it is good that he gave all the children back. He seemed to have a lot of power, somehow. I swan to John.

We did not effort to enter many stores, actually. A goodly, but not greatly, mob was in evidence. A denizen of the kiosks said to Beth, I wish I could put this on your neck. The this in question was one of those neck relaxers (Reed Richards swears by them!), whatever the hell those things are. I think this entrepreneur’s approach could use some work.

We tucked ourselves into Nordstrom’s for a bit. It occurs to me that they removed the red carpet that was there at the entrance in earlier visits. Some boys ahead of us actually hopped onto a couch as they hustled thru the women’s shoes district near the entrance. Had I just entered a John Hughes movie? Not much stopped me in the store. I saw an astonishingly loud shirt, a canny mixture of paisley and peyote would be my guess. Visited again the coat that would never be. It’s okay, it’s okay.

We stopped at Au Bon Pain. Scones for each of us: chocolat pour moi et orange pour mon amour. We consumed our scones in a rest area of couches and comfy chairs near a Cadillac that was either for sale or a contest prize. A family sat down just after us. Not exactly sat. The mother deposited her husband and 4 children so that she could invest some solo expedition. The man sunk swiftly into the comfort of a couch while the children swarmed. Three boys close in age and a girl, who was youngest. The girl wore a pair of pink wings, had a pacifier in her mouth, and one in each hand. Dad wanted to chill but that did not fit in with the directive of the children. At one point the boys ran excitedly towards the Cadillac with the girl in their wake. For about 20 seconds they showed considerable interest in and excitement towards the car, unlike the American public, then they returned as if there was naught to remark about the car. The boys then rushed off somewhere. Dad decided that the girl, eager tho she was, should not tag along. This was a blow to her, and she cried, thunderstuck. She was still in sulk as we left.

We made tracks to Whole Foods, in search of a ham. Beth wants to do a ham for Christmas Eve. We have friends coming. We are talking an uncured ham, which Beth will brine and glaze and whatever the recipe says. This is something she saw in Cook’s magazine. Neither of us, over the years, have been that much into recipes, but we have decided to follow recipes lately, and Cook’s Magazine supplies not only good recipes but helpful gastronomic science.

IA recent visit to Whole Foods afforded me a Yeti ornament, which I have not stuck on the tree, preferring to stick it over there. I seem to be collecting evidence of Yeti, that is, images of the fell creature. At this selfsame Whole Foods I got a picture of a Yeti produce box (I fortuitously had had my camera in my pocket). 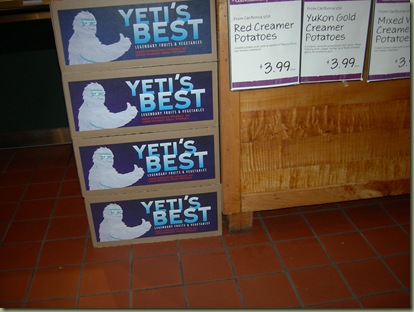 Note the encouraging thumbs up! It’s all right if Yeti says it’s so. I also found a beer, a stoutly stout, with Yeti appeal. 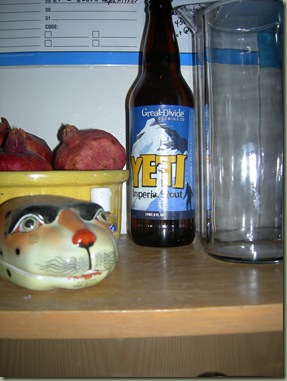 Close to 10% alcohol, a subtle wallop. Call it headache in a bottle, but I digress. Yeti has appeared in some of my writings, a book I mean to publish, so there’s the interest. The ornament is too white for me to get a decent picture of, at least so far, but trust me, I am on the prowl for more pix. Anyway, I guess there were no adventures at Whole Foods today. We ordered the ham and managed to return home unflaked upon. Four hours after the snow warning began here, still no snow. We shall see what Boreas delivers anon.

Posted by Simple Theories at 8:46 PM No comments:

Posted by Simple Theories at 9:38 AM No comments:

I went to the library yesterday to collect a bunch of books. I just wanted some variety. This is what I came home with:

Posted by Simple Theories at 9:03 PM No comments: