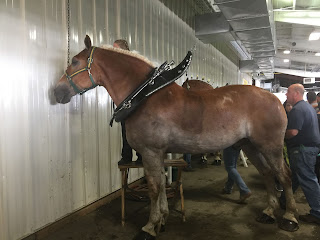 Beth and I attended the Topsfield Fair Sunday. It has allegedly been held these past two hundred years but it was my first time, as well as Beth’s.  We have both been to smaller fairs, me in NH, Beth in Alaska.

It was trafficky on the highway,  leaf-peeping time. Once off the highway, we slogged in line to the fair. We were directed to a field a couple miles from the fair. Parking on the fairgrounds had filled up an hour or more before the fair even opened. The field had an army of people directing cars to.parking places with a directive of economically using the available space. Shuttle buses brought us to the fair itself.

It was crowded, hey what. A nice, factory-issue autumn day. We were there for the livestock but it is not the most agrarian of fairs. Beth pointed out a cow with bloat. You could tell it was uncomfortable, it switched its tail, and nudged its expanded belly. I felt sad for the creature, and callous for looking at it.

Actually, I think our first act was buying fried dough. We had a few food vouchers and some cash for our gorging needs. I hate the captive audience food search common to such events, smug effing capitalism. Six bucks for a lump of dough fried in oil. Well, it was done well. Taken neat, no sugar or cinnamon, it was crisp on the outside, chewy inside, and not grease-soaked.

Eventually I needed actual food. I am one of regular feedings. A chicken fajita proved satisfying for me, Beth waited. I mean I could have fallen for deep-fried Oreos or some other scuzzy luxury. Elvis’ true vision.

The best part was going in where the draft horse were. Some turned their backs to us assholes, some preened. I didn’t see which but one started kicking loudly at its stall, the sound was alarming. The King Kong moment: I could imagine it busting free, wreaking vengeance on human perps.  Circs sort of amplified this feeling. Without calling people to evacuate the premises, people started removing the horses from their stalls. Handlers shooed us away while leading the massive horses away.

We moved to the arena, where three horse teams pulled wagons briskly. The horses moved in a high-stepped trot, with synchronized step. It was lovely to behold. I understand the lead horse sets the pace while the back two do the main pulling.

Rocks and fossils drew Beth’s attention. I consumed my fajita outside the tent before going in. You just have to give it up, get some on your shirt, standing around eating at a fair cannot be done neatly (Allen’s #1 Certitude). I saw a guy chomping on a turkey leg as he passed thru the crowd. Various fried foods on sticks, curious piles of enticing whatnot on paper plates. How about a sliced glazed donut with burger and bacon between? I  tried not to consume the foil wrap to my fajita. My second feeding was a pot roast sundae: meat, mashed potatoes, and corn in a cup with a cherry tomato on top.

We saw bees, some wild-looking scarecrows, a massive pumpkin. A woman lead a pair of handsome horses around the arena sans any rope, just gestures.

We sat in the bleachers for the Dock Dogs competition. Dogs leap off a platform into a pool, the challenge being to go the furthest. The record, we were told, is more than 30’. One dog got out there more than 20’. Could have gone further. The dog’s handler threw the toy too high and the dog twisted to try to catch it. Lily could probably do well what with the booster rockets she has for hind legs.

Our visit ended as it began, with fried dough. Looked at some of the most beautiful Christmas trees ever. I don’t know why anyone would buy one now tho I suspect they would last a long time.

A bus ride back to the lot, and our car where we left it. A lovely New England day.
Posted by Simple Theories at 8:15 AM No comments: