Having finished with Middlesex Community College, Erin transfers to University of Massachusetts at Lowell. He had an orientation last week, consisting of 2 days and a stay over. We had some heavy weather the night before. 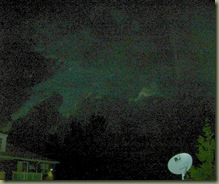 Er, um. The trip to Lowell (next town over) included meeting a major detour in an unfamiliar part of town. The traffic cop helpfully assured us that we would get there in time. He described a pleasantly circuitous route around the obstruction so that we could get back on the road we needed to take. We had to take ‘that first left’ onto a road he wasn’t quite sure was called Parker. Somehow, we felt antsy.

We found the university in time, plus a blue-shirted student who was directing traffic. Beth at the wheel told him we were here for orientation. The student said, “You’re here for orientation???" No, the fellow in the back seat. We were directed across the way to a parking lot. Another blue-shirted student with a light sabre danced and gesticulated to direct us into the parking lot. Beth told her to drink plenty of water. I was lucky enough to capture a picture of a chain link fence. 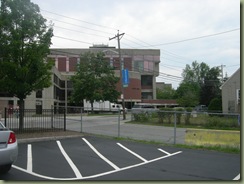 No, you do not see many chain link fences in the environs of Lowell, Ma. UML has a student union. Here they talk about scabs, blackleg miners, Doug Flutie (football scab), union dues, and the like. 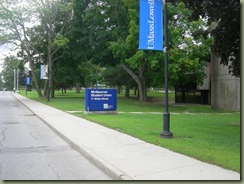 Surprisingly pretty campus. Erin waited in line for registration then we went to the dorm room where he would be sleeping that night. 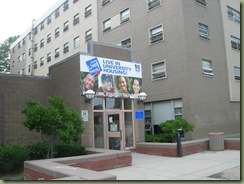 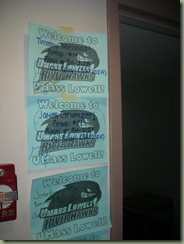 James = Erin (middle name), Gruenzer = Gruenzner. Spelling counts. The room was actually a suite with a common room, 2 compact bedrooms for 2, and 1 1/2 bath. I feel compelled to add crown molding, hardwood floors, and granite counter tops, but that is just HGTV on the brain. For sleeping purposes there were child-sized bunkbeds. Yikes! Erin barely fit and barely slept, more anon. By good fortune, I captured a picture of the springs of the top bunk (I think). 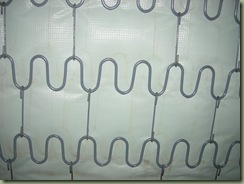 Then we wandered the campus. Lowell, shabby as it is, has a wonderful landscape of rolling hills and the mighty Merrimac flowing thru. The campus is green and restful. Here’s a picture of me with a magical orb that I found. 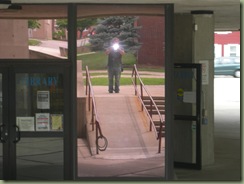 Here’s where I put it, so that it would not fall into evil hands. 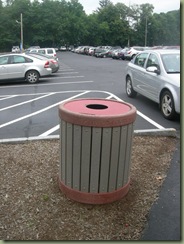 We left Erin to his devices. Erin has had next to zero public schooling. The rigours of MCC were at times an adventure, and UML will be a further one. He had a lot of fun during orientation. Thor made the event extra special by slamming his hammer (Mjöllnir, as you will recall) to a fare-thee-well, resulting in a severe sockdolager of a thumper. Erin and others celebrated the Thunder God’s tantrum by dancing in puddles and such like. Erin called Beth, who was working, and me, who by the second (third?) call was trying to sleep, to exhale his excitement.

Erin returned to his dorm room sometime late. The person slated for the upper bunk never appeared, but that did not help Erin. He slept an hour or two at most. We collected him in the afternoon. 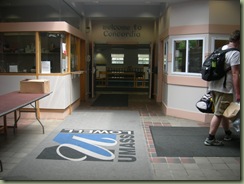