"I went to Gettysburg so that I could be in the same place where thousands of fuckers got their guts blown out and heads exploded and shit - bayonetts in the eye hole, skulls smashed with rifle butts, grape shot like massive shot gun blasts shredding through crowds of guys who are charging, screaming, shitting their pants - you know"--Bobby, at skullbolt

you know, we were coming back from West Virginia to New Jersey in June and lo, Antietam. so we spun around the battlefield a wee bit, and damn if I'm not saying it's beautiful, well kempt cornfields and hayfields, and the quiet majesty, oh and but. but Bobby got the temper of it there in Gettysburg. motherfuckers dying like dying's a charm. the South will rise again, the North will sink again. still, nice pictures of the battleground.
Posted by Simple Theories at 6:01 PM No comments:

probably be slow and quiet here for a while
Posted by Simple Theories at 5:54 AM No comments:

"...if a given poet is only one of two thousand equally worthwhile poets, why should any particular reader choose to read him or her? How can one distinguish oneself from the thousands?"--Jonathan Mayhew, the blog.

as a reader, one cerainly makes decisions given time to read is limited, and access to particular works may be difficult. I can't shake up the interest to read Hayden Carruth (well, I have a little bit, in the day), so I'm not even going there.

as regards distingushing oneself from the thousands: not my problem. I thought it was/is a problem for many reading at Bosstown Massacration, as poetry seems quite socialized among them. poetry is their interaction. but I see the matter of distinguishing as right out. god forbid I make a "Their Satanic Majesty's Request" in answer to someone's "Sgt Pepper's Lonely Heart's Club Band". I'll try ot figure something else out.
Posted by Simple Theories at 7:46 AM No comments:

the most expansive (impossible to attain complete) review of the Boston Massacre by David Hess. he took notes.
Posted by Simple Theories at 7:39 AM No comments:

Jonathan Mayhew, whose name can be spelled correctly if one applies oneself (I love volition), mentions Kenneth Irby. that seems good enough reason to put his (JM's) blog on my list. one of the more thoughtful, etc, but you knew that. I'm just pretending that I'm here.
Posted by Simple Theories at 9:08 PM No comments:

sometimes I wonder at my own lack of imagination. how come I never tried to produce visual pieces such as these by Jukka-Pekka Kervinen. well, one reason is that I haven't a clue how these are produced. I'd have to make up my own process. anyway, the point is how lovely and inviting these are.
Posted by Simple Theories at 10:29 AM No comments:

Jonathan Mayhem (oh god, look at that typo!) says fuck 'em, re Ammons and Carruth. news at 11. okay, I paraphrase slightly. he says he doesn't like them, and doesn't care that he doesn't like them, or that he doesn't feel guilty about this dislike. [drop me a line, by the way, if you would like me to paraphrase you]. [note: go here to find out what he really wrote, as of 8/5, and how he spells his name].I do NOT, love poetry, not in the way I love Irish music. sloppy Irish music is still fun. sloppy poetry is irritating, even distressing. I love the surprise of whatever works in poetry, whatever makes it 'good'. I don't need to be vituperative about my preferences, tho admittedly I am. but I don't feel guilty that just the thought of X, Y, Z (you've read them all too) makes my eyes focus on a future of blurred lamps feeding Arnold Schwartzenegger's implanted dull ripostes. you know what I'm saying?
Posted by Simple Theories at 7:37 AM No comments:

I feel present and somewhat unedited. could be the coffee.
Posted by Simple Theories at 7:37 AM No comments:

and now it’s just dread time, a special mailing. look over this document, where Stein signs her name. and pieces in the eye, and a word of mouth. we intend to see more. we lose a flavour in the ice cream. we try dialing out. how many moments flair as poetry for good, or into the time taken, as we listen too? what a question!!
Posted by Simple Theories at 8:35 AM No comments:

cold wax intelligence woke later reference mark. a bridge in Brooklyn. you could see it growing as an idea, until church is stupider than ever. looks frantic to farm. a collapse of popular vote into the smallest area. people are beginning to stop beginning. the city is effervescent, and the Bridge continues. was language in Hart Crane’s mind or somewhere else? the trick of native centuries, in which poetry and the like have almost thrived. and the piece that remains in discussion. who’s going to stop?
Posted by Simple Theories at 8:26 AM No comments:

I've been meaning to quote this passage from Truman Capote, because it is the topside of hokum, only the most creamy of wonder stuff: "My literary tasks kept me fully occupied: my apprenticeship at the altar of technique, craft; the devilish intricacies of paragraphing, punctuation, dialogue placement. Not to mention the grand overall design, the great demanding arc of middle-beginning-end. One had to learn so much, and from so many sources: not only from books, but from music, from painting, and just plain everyday observation." (Preface, Music for Chameleons). aint it the truth, Truman!!! I once pulled a hammy during a rough session paragraphing. whew. I dunno why one would need to make writing sound like such an act of suffering. I had a spell some years back of reading Capote, because his work seemed instructive. he got totally balled up in a very Hollywood conception of writing and art. drugs and alcohol flattened him, but his celebrity engine kept running. the thing is, that vision of the artist is wickedly and widely present. Love and Fame. and this guy who suffered so much for his art becomes an authority on the strength of that. of course Beverly Dahlen's authority is built on a greater foundation. Capote's Proustian claptrack Answered Prayers was a desperate attempt to make good on his scam. sigh. check out the author photo. a proud post rehab shot, older, but back to fighting weight. the fingers of his left hand are around his chin in standard author pose, goofy but common enough. the fingers of his right hand are by his chin. it's a highly conscious shot, adn yoiu wonder why he's so careful in this pose. it looks like he's giving a gang sign, or he's holding his head straight. at any rate, the picture summons consideration of the public author, and the sort of shit he or she may allow themselves to do.
Posted by Simple Theories at 9:07 PM No comments:

"this leaf, the local. splotched or daubed with silvery white a descending order of greens, and red. I read the seeds, colors and shapes. a bit of puff, a stick, thin and disguised. the wind beyond the hawthorn trees. the fifty year old canesof raspberries flourishing in another garden. pruning and watering he embodies the split mouth. is it, how little of this through the darkness of these slatted words. shaking at the bars, the cages, and I could wish my days bound each to each by natural piety. ther is a project called nature beyond the pale. a leaf, a stream, infringed upon, not safely in another dimension."-- B Dahlen, A Reading 8-10, Chax Press 1992.

I like this particularly for patience and thoughtfulness, the Wordsworth quote, and the last phrase. which kind of returns the object (written about) to the world, say, not just a poetic landscape.
Posted by Simple Theories at 8:30 AM No comments:

was reading some of Beverly Dahlen's A Reading yestreen. specifically the 2nd volume (8-10) published by Chax Press. the 1st volume (1-7) is from Momo Press, I believe (I couldn't find my copy last night), which I further believe was and/or is Stephen Vincent's press. the 3rd volume (11-17) is from Potes&Poets Press. I wanted to quote from the beginning of part 8, but the book isn't handy (is the book ever handy?), so I'll do that later. I wonder how 'popular' this work is. I find it quite engaging. sooth to say, I've never gotten far with My Life by Lyn Hejinian. I don't quite grok the excitement for that work, especially as I find works like The Cell and Oxota by her more compelling. I'm not being definitive here. I am always quite tentative in my views, even if I don't sound it. Dahlen's work is processual, in the way I was minded of with "Walking Theory". it is also coolly personal, rather like My Life. I have heard little about Dahlen and her work, but maybe I just haven't got my ear to the ground. certes, if one relies on Poetics list for what's going on, you'll realize none is going on whatsoever, NONE! there is amazingly little discussion about specific poets on Poetics. and a lot of it within the mindset that Silliman=Bernstein=Hejinian=Perelman... the monolith school for undertanding. The School of Brutalisms, the New Quietists. hey, let's all get out shoes on!!!
Posted by Simple Theories at 7:45 AM No comments:

from Lisa(Jarnot) Blog "This Just In: Dick Cheney is not edible." zounds, what an energy source this blog is!
Posted by Simple Theories at 7:25 AM No comments: 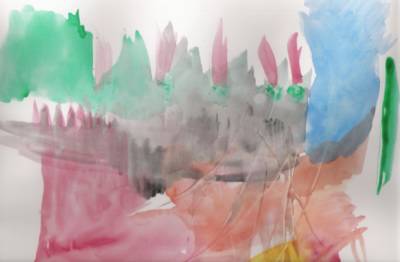 Posted by Simple Theories at 11:57 AM No comments:

so "Walking Theory" is processual. makes me think of Thoreau, not poetically (the poems reverb more of Zukofsky) but of place. and act of. when I ran heavy mileage, I often felt very grounded to the moment. I wasn't thinking, but absorbing. something like a meditative state. sometimes the strain of running wasn't so accomodating to this state or feeling, but neither did things have to be perfect. I dunno if SV writes while oot and aboot, or if the writing occurs later, of it some sort of both. I didn't write while running. certainly not pen in hand, and only rarely might I cogitate some lines. a kind of act of. Thoreau was so active in the landscape that I can't see not holding him as poetic exemplar. even if his art was more descriptive. I see Zukofky's landscape as different, more mental, but exemplary as well. and here SV has himself in a place and time. the matter of process means to me some maintaining energy. something in each day. not just 'here's the poem I wrote today, it seems I was walking the dog and suddenly I found that I said 'and suddenly...', and so forth'. and so forth.
Posted by Simple Theories at 11:26 AM No comments:

reading Stephen Vincent's "Walking Theory" and you can too. I searched his blog to the relevant posts, cut and paste, all together. these are pieces of attention. the poems, as well as Stephen's blog, show a lot of local (SF) detail, which interests me. not that it is SF but that the details are momentous and present. I want to 'take notes' like that.
Posted by Simple Theories at 7:29 AM No comments: