Sunday Beth and I did a number of things, nothing large but all satisfying. It was a beautiful spring day.

First, we did our volunteer work for OARS. I think that stands for Organization for the Assabet River System. The organization works towards improving the Assabet, Sudbury and Concord Rivers. The sources of the Assabet and the Sudbury are about a mile apart, 20 some miles away. They hook away from each other but end up in the Concord, which then ends up in the Merrimac, which is tributary to the Atlantic. Got the picture?

I was surprised by the industrial usage of the rivers, from earliest colonial times. Mills and tanneries, but even iron foundries, sat by the banks of these rivers. All of which, as you might imagine, had deleterious effect.

We met our squire at the Concord boathouse at 6am. He’s been doing this monitoring for several years. Our job was to take water samples and other data. We scooped water from the river, dunked a meter in the water, stuff like that. It was cool and quiet. Beth and I found that the water seemed to make our skin tingle, from that one dunking (the other two sites we visited, we used an extender to reach into the water from the precarious banks). 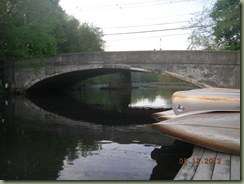 For some reason, we only had three spots to take readings from. Usually it’s more like six. Our next stop was Lowell, ignoring publicly accessible points in Bedford and Billerica. The first spot we hit was in this nook in the city. It was a cramped little village of houses. Provincetown offers a similar quality of houses close together in quaint congestion. Lowell alas is dumpish in nature. Still, the beauty of the land survives. 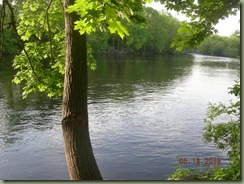 The site was a small park next to a bridge over the river. The Concord’s a pretty mopey river, especially in the area of Concord, but at this spot, it had some momentum. It looks sylvan but to the left is the bridge, well covered with graffiti, and let’s don’t forget to leave trash around.

Sadly my camera’s battery died so no more pictures. A little park above the river had a large arbour covered with wisteria, with species roses around it. Wowzer! Our guide warned us about poison ivy so Beth kept me back to just write down the data. Years ago, I had a bad reaction to poison ivy, which inspired a memorable response from Beth. One night in bed I was unconsciously scratching my affected arm and Beth in her sleep said, in succession, Don’t Scratch. I love you. What’s for dinner?

The next site was even more poison ivyish, down an embankment next to a building and near another bridge.  There was a dam upstream, and the water was suspiciously foamy. Readings there showed greater conductivity, which, I believe, means the presence of metals. Grape vines growing into the trees had bunches the size of my thumbnail. Here we bid adieu to our guide and headed home. We got coffee at Starbuck’s then went to the Concord Bridge. It is actually called North Bridge, tho Emerson called it rude. I don’t think Emerson ever saw a bridge at that location, in sooth. Several bridges there have been destroyed by flood, and I think in his lifetime folks settled for the bridge down the road.

The area around the bridge looked spectacular. Trees leafed out last week, and the sun shone. The National Parks Service in their wisdom have attempted to make the area look at it did during the Revolution, which is to say, divested of trees. A lot of trees were removed a few years ago, which I find disturbing.

An earlier visit to the visitor’s centre was equally dispiriting. It’s a former mansion sitting on a hill. Brick patios, if that’s what you want to call them, and walkways, go down the embankment. Vines and bushes made these walkways mysterious and wonderful, but they’ve been removed. The formal garden looks like it is cared for by the DPW. Sigh.

Anyway, it was lovely by the bridge.  A Canada goose barked and barked. I watched it drift across the river, barking rhythmically. Another goose, probably his mate, hung back. Sounded like he was taking command of the whole river area. 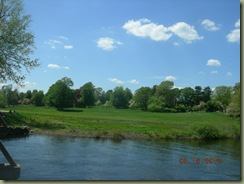 We had pancakes that Erin prepared then Beth and I went out again. Beth wanted pictures of the Bridge. We then headed to Lowes in Lowell, again, and got a couple of ferns and a bird feeder for our porch. Oh, I guess I should mench that we stopped at a car wash, and cleaned the car thoroughly inside and out. That’s a gift and a thrill for Beth.

Not quite satisfied, plantwise, we stopped at a nursery. We got a basket of impatiens and some other plants. One was a green and yellow variegated planted with leaves that resemble a maple in shape. The flower is a round sort of tulip shape (abutilon: new to me)     bbbb. Unusual. Beth hung the feeder and basket, and arranged the other plants. ten hours later, a redpoll sat on the feeder bracket and announced his territory. A little later a female nestled into the pothos. That afternoon, a hummingbird partook of the impatiens.

Posted by Simple Theories at 8:10 AM No comments: